Among our some 200 pages of material, you'll also find dozens of pedigrees, interviews with Breed veterans, and insight into the best people dog on earth. Enter StaffordMall.com and discover "One of the finer things in life" - the Staffordshire Bull Terrier.

A born fighter, the Staffordshire was the perfect combination of the Bulldog and the Old English Terrier of the seventeenth century. He possessed the strength and gameness of the Bulldog with the speed and agility of the Terrier. The performance of this cross was tested in the dog pit and therefore, natural selection, over a period of decades produced the perfect fighting machine.

Prior to the formation of the Breed Club in 1935, the Staffordshire Bull Terrier was commonly known as the Bull and Terrier or the Pit Dog.

Today with the abolition of the barbarous sport of dog fighting, the Staffordshire Bull Terrier has taken on a different breed type.

With the formation of the first Staffordshire Bull Terrier club in 1935, a standard was drawn. Jim the Dandy owned by Jack S. Barnard, was chosen as the

most perfect specimen of his time, and his breeding could be traced back thirty years or so. If we compare that standard with today's standard, and then compare the majority of today's show specimens with either standard, we can see that a contradiction of type exists, and that the Bulldog has been developed at the expense of the Terrier. We find this unacceptable, since the combination of both breeds was essential to producing a dog that was very unique and original. 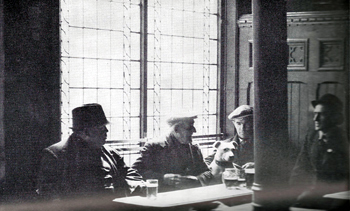 Thus, the Stafford was bred to have and indeed does have a complete and permanent disconnect between his view of other canines and his view of people.  Since I started the Breed in Finland in 1964 and in the States in 1967, the only incident I know of regarding improper Stafford behavior toward a person was a case in Illinois where a male Stafford I had sold as pup to be a guard on a Thoroughbred farm snapped at a child. Didn't lay a tooth on the child, just snapped (under some provocation I am told). I immediately sent a free replacement to the owner on the proviso that the Stafford in question be humanely destroyed. 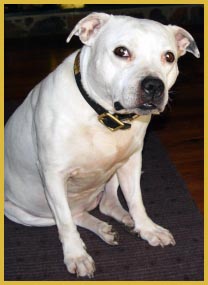 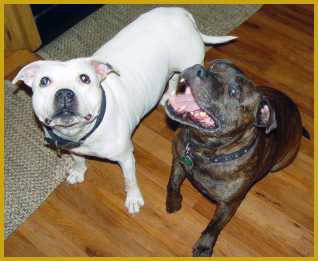 The StaffordMall is produced and maintained by: