Peck's Miss Tuffy litter of seven lively pups from the past. The daddy was Peck's Chip Off The Block, "Nacho".

He is six months old in this photo taken at Christmas 1997. Sent to us by his proud parents, Lisa & Jon Ficklin.

Hondo is the sire of this puppy out of a litter of three. The dam is called Flo Jo. Flo Jo is owned by Malcolm of Stockton, California. Born November 1, 1997.

The second puppy out of this litter born November 1, 1997.

Welcome to the World

Hondo and Daphne produced this litter of three on December 23, 1997. Three very good puppies, one male and two females.

Sent to us by, Dave, his proud owner.

Weekend warriors at rest, Max and his buddy Dave.

Tuffy was owned by Robert E. Lee of Oakland, California. A very balanced example of the Bull & Terrier. Tuffy was about nine or ten years old in this photo. One of the winningest Staffords of all time.

Shown here on the bench at the Cow Palace, which is a two day show. Wonderful pied bitch. Our first Staff.

She won best of opposite sex that day at the Cow Palace.

Sadie was bred by Richard and Elizabeth Vroman of Los Gatos, California.

Just kidding of course. This is a horse. Royal Lad is a registered Arabian. He was a Top Ten Arabian Stallion at Scottsdale a few years back.

This is the Sire of Single White Female, Pearl's and Daphne's Dam. 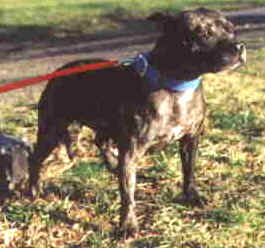 A much better photograph of this dog is on the cover of the book "Staffordshire Bull Terrier" by Dieter Fleig.

Ch. Peck's Chip Off The Block

Nancy Malec and Murphy winning Best of Breed at a 1992 show. This is Hondo's Sire.

This is another photo of Benica Boy.

This is Pearl's and Daphne's Dam.

Pearl and Daphne are in there somewhere. Litter of nine puppies. 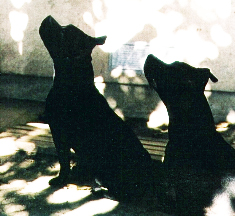 The other photos are from Steve Eltinge's book "The Staffordshire Bull Terrier in America ", 1986, Multi-Image Presentations. This book is no longer in print and is going used for very high prices. If you ever get the chance, you owe it to yourself to obtain a copy. I didn't put this book high on my list of favorites for several years, but with age, both myself and the book, it is much more valuable. It has become an important work that documents the history of the Stafford in this country.

Ch. Quite Contrary of Rapparee

We don't know how old she was in this photo, but when Mrs. Nancy Bolton, her owner and breeder, sent me this photo in September, 1987, she was sixteen years old and still going strong.

He is 18 months old in this photo.

The first Staffordshire Bull Terrier to win an ALL-BREED BEST IN SHOW. He won at least 145 Terrier Group Placements, including at least 26 Group Firsts, and was the first SBT to place in the top 20 Terriers for the year.

From chapter I of Steve Eltinge's book "The Staffordshire Bull Terrier in America" we learn that the first Stafford that Steve Stone bought was Belle. Brutus was already here in the US.

For further insight into these two cornerstones of the Stafford in the United States and Finland, in Steve Stone's own words, click this link.

Brinsley with his owner Claude Williams.

Imported from Australia. She was the first Australian import to win her Championship in the United States.

The first SBT registered in the AKC stud book.

Absolutely beautiful photo of a mother with two of her pups.

A wonderful bitch that was used in a lot of breeding programs.

An important male Stafford in many US breeding programs.