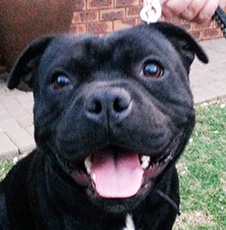 He now resides in Northern California, USA. He is owned by Carolyn Stewart, Terry Stewart and Huntly Pringle. 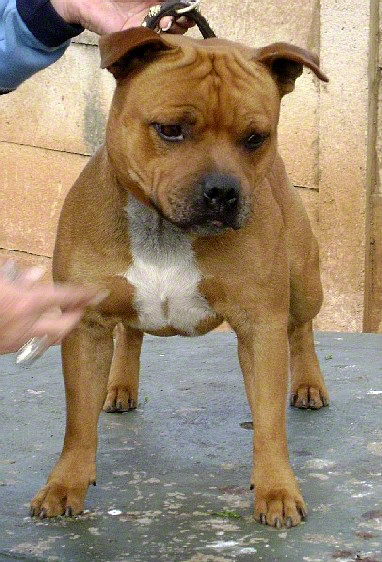 Portos arrived on July 29th, 2009, from South Africa. See some of his Challenge Certificate copies here. His health certificates can be seen here.

He now resides in Northern California, USA. He is owned by Carolyn Stewart, Terry Stewart and Steve Stone.

Portos has had a very active and successful show career in South Africa. He became a Champion in 2007.

Many of Portos' wins (CCs) were under International judges:

He also acquired a Terrier Group 1 in July, 2007, under Judge Keri Nichols (Australia) at the Durban all breed show, Eukanuba sponsored, 132 Terriers in the group. 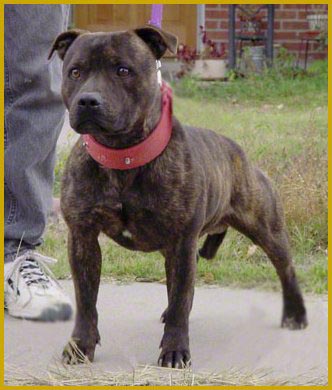 Rugar now resides in Northern California, USA. He is owned by Carolyn Stewart & co-owner Steve Stone. Formally of the Sensational Stafford Kennel in New Mexico and a very successful stud for his former owner, Lewis Bogel.

Sire to several American and Canadian Champions in confirmation and agility. Rugar is pictured here at his former home in New Mexico, USA. Rugar is proving to be an excellent sire, including among his progeny, Can. Ch. Sensational Fly 'N' High (Winston), Best In Show winner and twice Best Puppy in Show winner.

Hondo is a dog of correct type and temperament. He is also extremely intelligent and athletic. As a stud dog, he tends to throw short backs, great heads and good bone.

Drago is a prime example of the type of dog produced by Hondo. We look forward to many more like him. 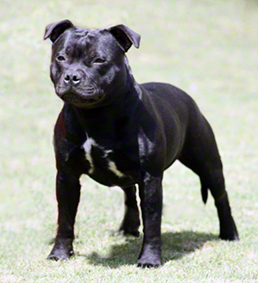 Visit Batista's page here for his owners contact information. He is available at stud and has frozen semen available. 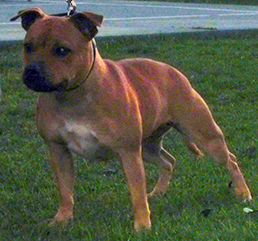 Kyra is a daughter of Portos.

Grace now resides in Northern California, USA. Formally of the Rioghal Staffordshire Bull Terriers of Pretoria, South Africa, Grace has had a very nice show carrier for such a young age and has whelped a very fine litter for her former owners, Henry and Elize Strachan. 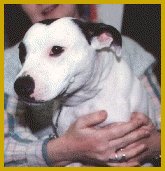 Pittunia is nicely balanced and has great hindquarters and excellent movement. She possesses a sweet disposition and fun personality. We are so happy to have her. She passes her good type and temperament along to her puppies.

A wonderful addition to our breeding program, Pearl is a combination of the Rapparee and Lawbury lines. With one litter to her credit, we know that her star will surely shine.

This is Pearl at three months. She had just arrived in the USA.

Daphne is a full sister to Crackerstaff Silver Star and is also a lovely bitch. She is sweet and so animated, a real character. Her first litter is due around December 26th, 1997.

Daphne at three months. She had just arrived in the USA.